Have You Been Watching…The Fall

The Fall is dark. You might think black is dark but that is nothing to The Fall. In the space of the first three episodes the show has already touched upon stalking, police corruption, gang violence, murder, police brutality and pedophilia. Most importantly the show is great.

The setup is simple, after a murder case is not solved in 28 days, Gillian Anderson’s Stella Gibson, trying her best not to look like Dana Scully out of the X Files, is seconded from London to help out the Belfast Police Force. At the same time we watch a serial killer, Jamie Dornan stalk and kill his victims. Of course soon their two paths cross.

All so standard crime plot yet not for The Fall. The writing, acting and direction makes the show so much more. All the characters feel real. None of them are walking TV Tropes. Even our serial killer feels like a real human being. The kind of person who’d see in the pub, although I might edge away slowly if he actually sat down beside me.

This sense of reality makes the whole show much more scary. There are no massive explosions or clichéd speeches of other crime shows. Indeed the scene where one of the victim’s sister calls in her murder is so powerful because it is down played. The calm 999 operator just talks her through the whole thing, pauses when she’s done and then moved onto the next call.

This is helped by the way they film Belfast. When you make a point of filming a show in a particular city you have two ways of doing it. The first is the Richard Curtis method, all famous places and stereotypes. “Is that the Queen eating scones while Morris dancers gaily skip around Big Ben?”

The second method is that you put the differences in the foreground but don’t mention them. When you are filming in Belfast the ‘Norn Iron’ accents kind of help. Most the characters certainly don’t sound like they have just walked off the set of Midsummer Murders. On top of this you have the subtle and less subtle clues. Reminding Gibson, “you are in Belfast now” every episode is not needed when you have the Police armoured cars and other gentle hints which work much better.

This subtle continues in the direction. The director, Jakob Verbruggen, uses a number of interesting techniques to create the tension and atmosphere. For example scenes are shot through door frames so the viewer comes across as a voyeur; voice overs from one story is used to describe what is happening in the other. My favourite example is when we see how the serial killer can listen to two conversations at the same time. The audio cuts back and forth so we fully understand both conversations.

I don’t have time in his review to detail everything that is great about this series. The only thing I can suggest is to watch it for yourself. You won’t regret it, unless you are alone in your house, it is dark and floorboards start to creek… 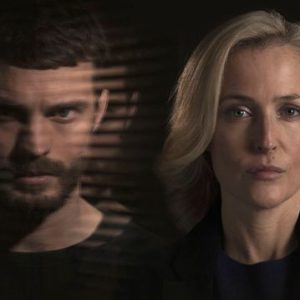 The End of The Fall Series 3